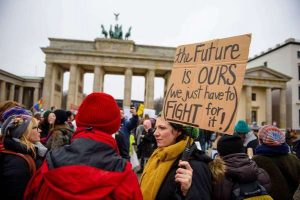 It is hard to ignore the growing interest in gender equity issues on both sides of the Atlantic. This is especially true in March – which is Women’s History Month in the United States and only a handful of other countries. But, it is normal to see gender issues discussed in the American and German media on a regular basis.

At the end of February, a small group of women in Germany launched the Feministisches Netzwerk, a counterpart to the Women’s March on Washington movement. Growing out of the nationwide demonstrations in favor of the rights of women, minorities, and the LBGTQ community on January 21, the Women’s March is now a nonprofit organization with a growing network both nationally and internationally.

Across Germany and the United States, thousands of women took part in the Women’s Strike Day on March 8, which was held in conjunction with International Women’s Day. The goal of the Strike Day was to demonstrate how important women are to the economy. While not everyone woman could afford to take part in the strike, rallies could be seen in cities like Berlin, Frankfurt, and Munich, not just Washington, DC and New York.

Only a few days after International Women’s Day, the German Consulate in New York hosted a small meeting with State Secretary Elke Ferner from the German Federal Ministry of Family Affairs, Seniors, Women, and Youth. Though the conversation focused largely on U.S. politics, Secretary Ferner noted that she was impressed by the growing interest in women’s issues and the success of the Women’s March on Washington.

Even as gender issues gain visibility and awareness, no country has gotten gender equality right as of yet – though some do it better than others. According to the World Economic Forum’s Global Gender Gap Report 2016, Germany was ranked as 13th in the world, whereas the United States was ranked 45th. Those numbers are likely to change this year – quite possibly for the worse – but it is still too early to tell.

Though relatively high on the list, Germany still has one of the largest gender pay gaps in the EU, at 21.9 percent. A lack of income transparency is thought to be one of the reasons for this gap. Manuela Schwesig, Federal Minister of Family Affairs, Seniors, Women, and Youth, has made the gender pay gap the focus of her work in recent months.  The Wage Transparency Law, which is expected to be voted into law soon, would require companies with more than 200 employees to pay people in the same position the same salary regardless of gender. This would certainly be a positive step toward reducing the income gap.

Addressing the gender pay gap is not new for Germany. Now in its seventh year, an Equal Pay Day conference was held in Germany. Organized by the SPD, the conference brought more than 250 business leaders and policymakers to Berlin to discuss how to close the gender gap.

On the very snowy morning of March 14, the ACG and the Konrad-Adenauer-Stiftung hosted a breakfast briefing in New York with Bundestag Member Ursula Groden-Kranich (CDU). She discussed the tough negotiations while formulating the legislation and mentioned that similar discussions are going on in other European countries. “We need new laws for today’s realities,” Ms. Groden-Kranich said, referring to rigid legal frameworks when it comes to flexible working hours, child care, and pension entitlements. “It is still of utmost importance to work on changing the common mindset in our societies. Laws can only give incentives and accompany those processes.”

While Germany’s legislation would be a significant step forward, other countries are far more progressive. For example, on March 8, Iceland enacted a more comprehensive law to reduce the pay gap. Icelandic companies with as few as 25 employees will now be required to show proof that they are offering equal pay for equal work. The country has pledged to eliminate the gender pay gap by 2022. Germany’s Wage Transparency Law would probably not be as drastic in timing or scope, and the pay gap would likely exist much longer than five more years.

But closing the gender pay gap is not the only gender issue in Germany. Even with women as Chancellor and Defense Minister, there is still a stigma of women in the workforce. Working mothers in Germany too often are criticized if they go back to work too soon after having a child, and the vast majority of mothers do not return to full-time work.

Even though Germany has mandatory quotas for executive boards to be 30 percent female, to date executive boards are only 22 percent female. In a report from Warth & Klein Grant Thornton AG, last year German women held only 16 percent of senior-level positions, whereas the United States was at 23 percent. Even more surprising is that 60 percent of German businesses have no women in senior management positions.

While one can certainly see that Germany is trying to improve gender equity, the country is still lagging behind. If Germany – or the United States for that matter – fully embraced gender equity, there would be no need for gender quotas and wage transparency. Perhaps it is time for Germans and Americans to realize the importance of women in the economy across the board – and not just in the boardroom .

In March, the spotlight was focused on women and gender issues. Early in the month, a former Bundestag member asked me whose responsibility it is to close the gender gap. I answered his question with one word: “Everyone.” And, not just in March, but all year around.

Posted on April 3, 2017 by Robin Cammarota in News0 comments