30 Years Since the Fall of the Wall

2019 marks the 30th anniversary of the fall of the  Berlin Wall, setting into motion the unification of Germany. To recognize the significance of this historic event, each month the American Council on Germany will feature individuals as they reflect on life before and after the fall of the Wall.

ACG Board member Ambassador Richard W. Fisher (1977 Young Leader) served at the 12th President of the Federal Reserve Bank of Dallas from April 4, 2005, to March 19, 2015. He was an Assistant to the Secretary of the Treasury during the Carter Administration and later served as Deputy U.S. Trade Representative, overseeing the implementation of NAFTA and helping negotiate the bilateral accords for China’s and Taiwan’s accession to the World Trade Organization. As a young man, he traveled to Germany several times with the American Council on Germany. Here is reflects on some of those experiences:

As a Young Leader alumnus of the class of 1977, I was selected as an American delegate to the XII American-German Conference on East-West Issues in 1983. At the closing-night dinner, the Governing Mayor of West Berlin and future President of Germany, Richard von Weizsäcker, for some reason asked me to “come with me.” His office had a window that jutted out to overlook the Wall. “Young man,” he said, “I may not live long enough, but you will see this wall come down. Freedom cannot be forever repressed.” Thus began my Forrest Gump-like adventure with the tearing down of the Berlin Wall.

The Chairman of the ACG in 1989 was former Senator “Mac” Mathias, who that year was in seriously failing health. He called me to say he was too ill to attend the Bundestag ceremony celebrating the Wall’s demise. Could I represent the Council in his place? Without hesitation, my wife, Nancy, and I booked a flight to Berlin through Frankfurt that very evening, arriving in time to join Chancellor Helmut Kohl on the steps of the Bundestag, facing a huge crowd of torch-bearing Germans in the throes of celebration. I stood behind the Chancellor; photos of the event show me trying to peek out around his large frame. 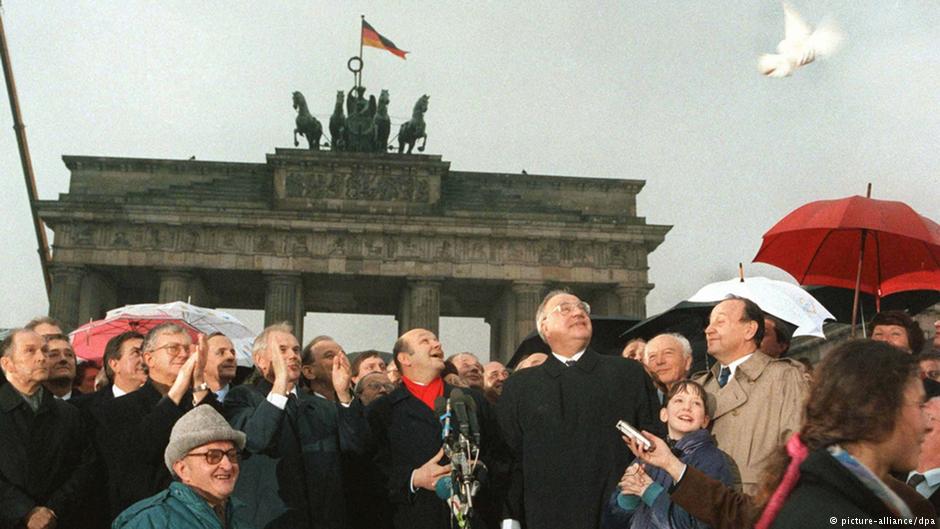 At the conclusion of the ceremony, an aide to the Chancellor whispered to me that should we wish, Nancy and I were invited to join the Chancellor at a reception in East Berlin with some GDR leaders. We jumped at the opportunity. A car materialized, and we were whisked to East Berlin.

At the reception, a woman introduced herself to me in halting but still intelligible English.

“Are you an American?” she asked.

She explained that she was a member of the East Berlin City Council.

“I love American literature,” she said.

“Really? And how do you have access to our literary work?” I asked.

Then, turning to look at Nancy, she said, “Is this your moll? Do you carry a rod?”

“Your English, madam,” I replied, “is most interesting. Tell me, which American authors have you been reading?”

Her answer astounded and delighted me: “Well, only one. Mickey Spillane. I know I will love the freedom to read more American literature.”

This moment is indelibly etched in my mind. To think that Mickey Spillane and his signature detective character, Mike Hammer, ignited a love for Western literature in this East German official brings a grin to my face every time I think of November 1989.

Before we left Berlin to return home, Matthias Wissmann, a dear friend and a member of the Kohl cabinet (and a Young Leader in 1982), handed me an envelope dated November 9. It contained a piece of the Wall.

When I returned home, I had it framed and gave it to my son Anders with a note saying:  “A reminder of the absurdity of tyranny and the ultimate power of the will to be free.”

Anders became an ACG Young Leader in his own right, as did my younger son James (aka Miles). To this day, they have a passion for freedom – and for Germany.

Posted on March 8, 2019 by Robin Cammarota in News0 comments