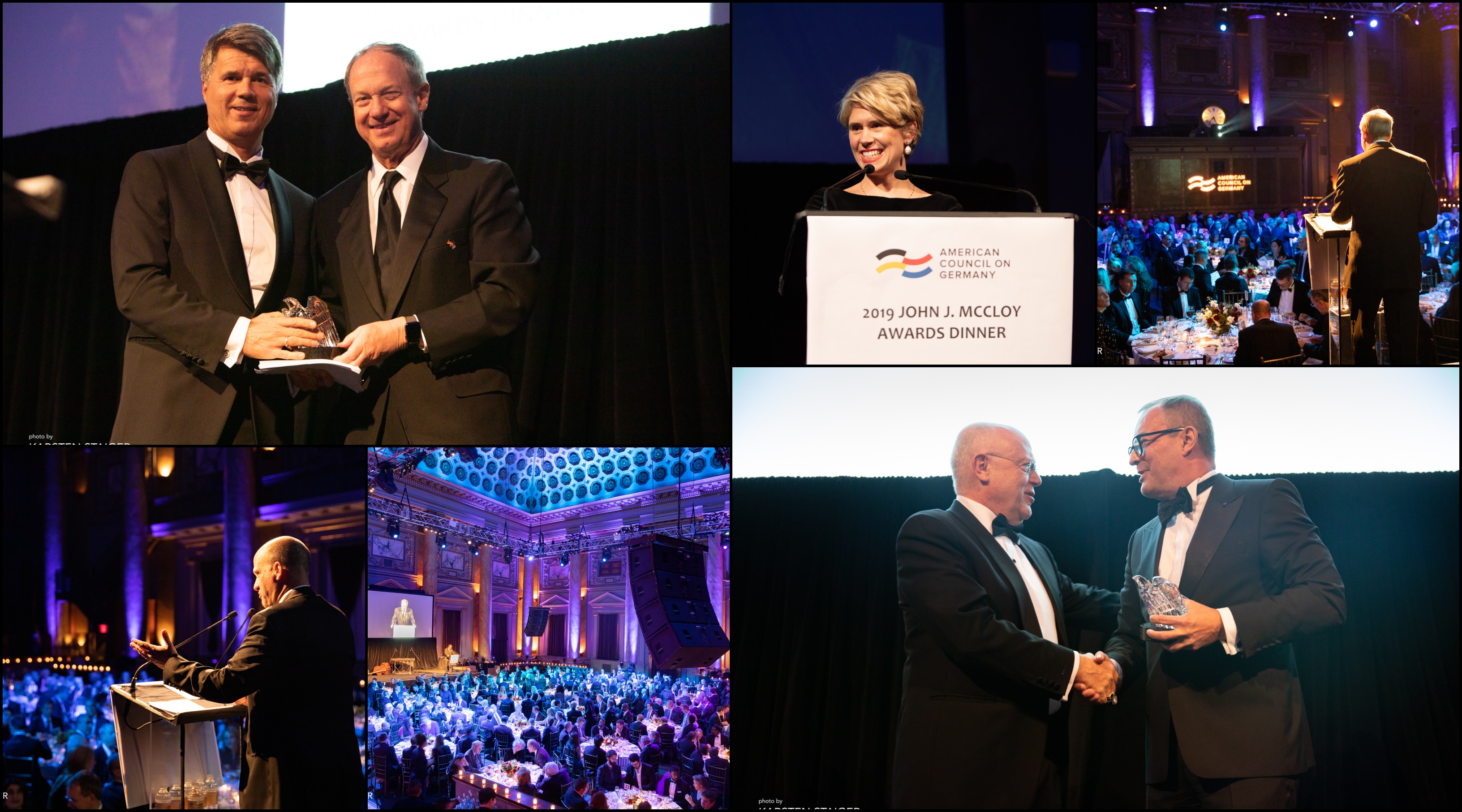 On December 4th, the American Council on Germany (ACG) held its 27th Annual John J. McCloy Awards Dinner at Capitale in New York City. Before an audience of more than 300 friends and supporters of the ACG, two distinguished individuals – Harald Krüger, former Chairman of the Board of Management of BMW AG, and Ian C. Read, Executive Chairman of the Board of Pfizer Inc. – were recognized for their deep commitment to transatlantic relations. The award is named after John J. McCloy, the first civilian U.S. High Commissioner for Germany following World War II and the founding Chairman of the ACG.

Since BMW opened its first dealership in the U.S. in 1975, BMW has become one of the country’s top sellers of luxury automobiles and one of the most valuable brands worldwide. The BMW Group’s largest plant in the world, in Spartanburg, South Carolina, is celebrating its 25th anniversary this year and represents an investment of $10.6 billion. Harald Krüger in fact has direct ties to BMW’s Spartanburg plant, working on the original team from 1993 to 1995 that worked on the construction of the plant. In the United States, BMW employs approximately 70,000 Americans directly and indirectly, and BMW has been the biggest U.S. automotive exporter by value for the past five years. For the BMW Group’s deep commitment to strong transatlantic trade and investment ties, the ACG was honored to recognize Harald Krüger with the 2019 John J. McCloy Award. The BMW Group has also been an ardent supporter of education and training, serving as a model of how the educational and manufacturing sector can collaborate to provide employment and better opportunities for the next generation.

Founded 170 years ago in New York City by cousins Charles Pfizer and Charles Erhart, two German immigrants, Pfizer has grown from a small chemicals company in Brooklyn to a multinational pharmaceutical company with a global portfolio of medicines and vaccines. Last year, Pfizer celebrated its 60th anniversary of operations in Germany. The ACG was honored to recognize Ian Read with the 2019 John J. McCloy Award as a passionate advocate for close collaboration between the United States and Europe. There are no other regions in the world that are as deeply integrated as the EU and the U.S., and strong trade has fostered a climate of innovation that is transforming quality of life across the globe. This history of exchange across the continents has led to groundbreaking science and lifesaving medicines. We are pleased to recognize Pfizer for its contribution to the remarkable advances in health care, the economy and society on both sides of the Atlantic.

Commenting on the awardees, ACG Chairman and former U.S. Ambassador to Germany John B. Emerson said: “These companies, exemplified by the leadership of Ian Read and Harald Krüger, clearly demonstrate the intricate ties between the United States and Germany. Whether it’s trade and investment, job creation, innovation, or research and development, this relationship is truly indispensable and mutually beneficial to both of our countries. It is my distinct honor to acknowledge these outstanding individuals for their companies’ commitment to transatlantic relations.”

German Ambassador Emily Haber shared a letter from Chancellor Angela Merkel which noted that on the 70th anniversary of the Federal Republic of Germany and the 30th anniversary of the fall of the Berlin Wall, Germany expresses gratitude for the great support that the United States has given Germany over the decades – in building the country’s economic relations in the post-war years, in integrating the former Federal Republic into the international community, and to restoring Germany’s unity. Chancellor Merkel commented further that reunification would have been unthinkable without the trust built up in Germany through constant dialogue, and this dialogue and trust continues to be the foundation of our partnership today. Ambassador Haber observed that it was December 4, 1989 when hundreds of thousands of East Germans marched in protest saying “Wir sind ein Volk”, making it clear that a reunification of the two Germanys was inevitable.

Kimberly A. Reed, President and Chairman of the Export-Import Bank of the United States and ACG Young Leader alumna, shared a letter from President Trump who expressed the significant progress in addressing the issues and challenges that matter most to the citizenry in both countries since the fall of the Berlin Wall thirty years ago. Germany and the United States remain united in our shared goal of building a stronger, more prosperous Europe and global community. Ms. Reed noted the impact of the ACG’s Young Leader program, citing the many alumni, including herself, who currently serve in the Trump administration, and who have served in government in the past.

ACG President Steven E. Sokol summed up the message of the evening saying “Today some people might question the relevance of the transatlantic alliance, but those of us gathered here this evening should recognize that this is a critical juncture for Europe and for the transatlantic relationship. We have to build mutual understanding about issues where we may have differences. And, that is what drives the American Council on Germany: a mission of deepening mutual understanding between Germany and the United States and helping individuals and institutions on both sides of the Atlantic adapt to an ever-changing environment.”

The ACG expresses its gratitude and thanks to all our friends, board members, supporters, and contributors, whose steadfast commitment enables the organization’s successful fulfillment of its mission. Without your engagement, the ACG would not be able to offer such a rich assortment of programs and activities to strengthen and reinforce the German-American partnership