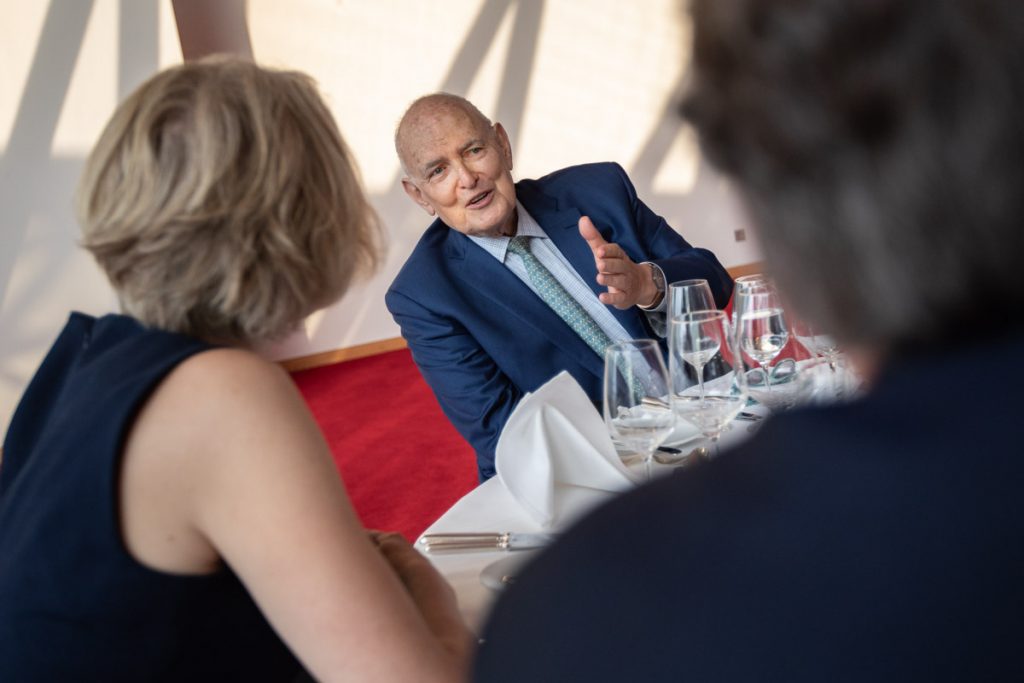 Former ACG Board member Dr. Guido Goldman – a consummate and pivotal transatlanticist deemed a “U.S. Bridge to Germany” by the New York Times – passed away on November 30 at the age of 83. Throughout his life, he tirelessly championed German-American relations through a variety of organizations and institutions, including the American Council on Germany, on whose Board he actively served from 1975 to 2014. Dr. Goldman was the founder of the German Marshall Fund of the United States and Co-Founding Director (together with Professor Stanley Hoffmann) of the Minda de Gunzburg Center for European Studies (CES) at Harvard University.

CES characterized Dr. Goldman as an “architect of enduring partnerships between Germany and the United States” and a “visionary academic entrepreneur,” and these traits shined through also in his significant work with the ACG. Dr. Goldman was part of a small but dedicated group of individuals who helped facilitate the creation of the ACG’s McCloy Fund, which began as a gift from the German government in connection with the United States Bicentennial in honor of founding ACG Chairman John J. McCloy.

With a nod to his forward-looking nature, Dr. Goldman led an ad hoc Board committee in 1992 called ACG 2000, which assessed the Council’s long-term interests and priorities for the new millennium. Known also for his conviviality and generosity, Dr. Goldman hosted a large 60th -birthday party for Dr. Henry Kissinger, a longtime friend and mentor of Dr. Goldman’s who remains an ACG Board member to this day.

As a tribute to Dr. Goldman’s work and vision, in 2003 the ACG established the Dr. Guido Goldman Fellowships for the Study of German and European Economic and International Affairs. The fellowships support promising American academics whose research focuses on the study of economic policy and foreign affairs in a transatlantic context. Fellows carry on his legacy by researching the nuances of Germany’s role as an economic engine and political leader, both in Europe and in the global arena.

Dr. Goldman was passionate about the arts as well. He began his ikat collection in the mid-1970s, eventually amassing one of the world’s largest collections, which he later donated to the Smithsonian and other institutions. He also was a longtime Board member of the Alvin Ailey American Dance Theater, and he brought dancers’ talent to German and ACG audiences on multiple occasions, including at the Council’s McCloy Awards Dinner. When the new U.S. Embassy opened in Berlin in the historic Pariser Platz in July 2008, Dr. Goldman arranged for a performance by Ailey dancers at Amerikafest. The events in Berlin combined high politics and culture, with speeches by President George H.W. Bush and Chancellor Angela Merkel. The Amerikafest brought to Berlin some of the most talented and vibrant young dancers that America has to offer, and served to strengthen transatlantic cultural ties. The ACG also worked together with the Alvin Ailey American Dance Theater in a similar vein several years later by sponsoring their opening night at the Deutsche Oper in Berlin in July 2011. Artistic Director Emerita of the Alvin Ailey American Dance Theater Judith Jamison spoke about the impact of transatlantic culture at the ACG conference “The Transatlantic Partnership in the 21st Century” in Berlin in 2011.

Dr. Goldman was born in Switzerland, but his father, Nahum Goldmann, a leading figure in the Zionist movement, moved the family to New York in 1940. His mother, Alice (Gottschalk) Goldmann, was a German painter and heiress to a fortune built on mail-order catalogs. Dr. Guido Goldman graduated summa cum laude from Harvard College in 1959 and went on to earn a doctorate in 1969 with a prize-winning dissertation on “Heavy Industry and Foreign Policy in the Weimar Republic.” As a graduate student, he worked with Dr. Kissinger to establish the German Research Program, now the Minda de Gunzburg Center for European Studies.

When the 25th anniversary of the Marshall Plan was approaching, the West German government sought out Dr. Goldman’s advice on how to commemorate it. Dr. Goldman mapped out plans for a think tank backed by a significant endowment from Germany that came into being as the German Marshall Fund. Dr. Goldman became the inaugural President and Chairman of the Board, a position he held for the next four decades.

A memorial service to celebrate Dr. Goldman’s life and work will be planned once it is possible to convene in person again. The English version of a biography on Dr. Goldman, authored by Martin Klingst of Die Zeit and commissioned by the German Foreign Office, is due out in the spring. Appropriately, it is called Guido Goldman: A Transatlantic Bridge Builder.

We mourn the loss of Dr. Guido Goldman, and we celebrate the many bridges he brought to fruition between Germany and the United States. His memory lives on through the institutions and organizations he helped create and/or lead, and also through the fellows who look to follow in his footsteps.