Building on the American Council on Germany’s long history of addressing the role of cities and its focus on the exchange of best practices by urban affairs experts in Germany and the United States, the ACG is conducting an immersive exchange program on sustainable urban development. This initiative builds on a similar exchange conducted in 2018 and is designed to focus on the varied challenges of sustainable development on both sides of the Atlantic.

As part of the Sustainable Urban Development Study Tour, from December 8 to 14, eight urban affairs experts from the United States and seven from Germany explored how cities are addressing common challenges in Düsseldorf, Heidelberg, and Mannheim. Through a range of meetings and site visits, the cohort engaged in conversations at the city and state levels.

On the evening of Sunday, December 8, the program began with dinner with the Lord Mayor of Düsseldorf Thomas Geisel (1992 Young Leader). Outlining the challenges facing his growing city, Mr. Geisel said that one of the major issues is affordable housing within the city. The issue of affordable housing was a common theme throughout the week.

The city of Düsseldorf has gone through tremendous changes in the last decade. Although it was predicted to become a shrinking city, the population has grown to more than 650,000 and increases by more than 5,000 each year. This has lead to an increase in the cost of housing and more people commuting into the city each day. This has put new pressures on the public transportation system of the city. Through meetings at the Stadtplanungsamt (city planning office) and Verkehrsmanagentamt (traffic management office), the group discussed how Düsseldorf is tackling these challenges. The city now requires that new constructions are 40 percent affordable housing and in recent weeks has instituted a traffic congestion plan, which limits the amount of traffic to the center of the city. 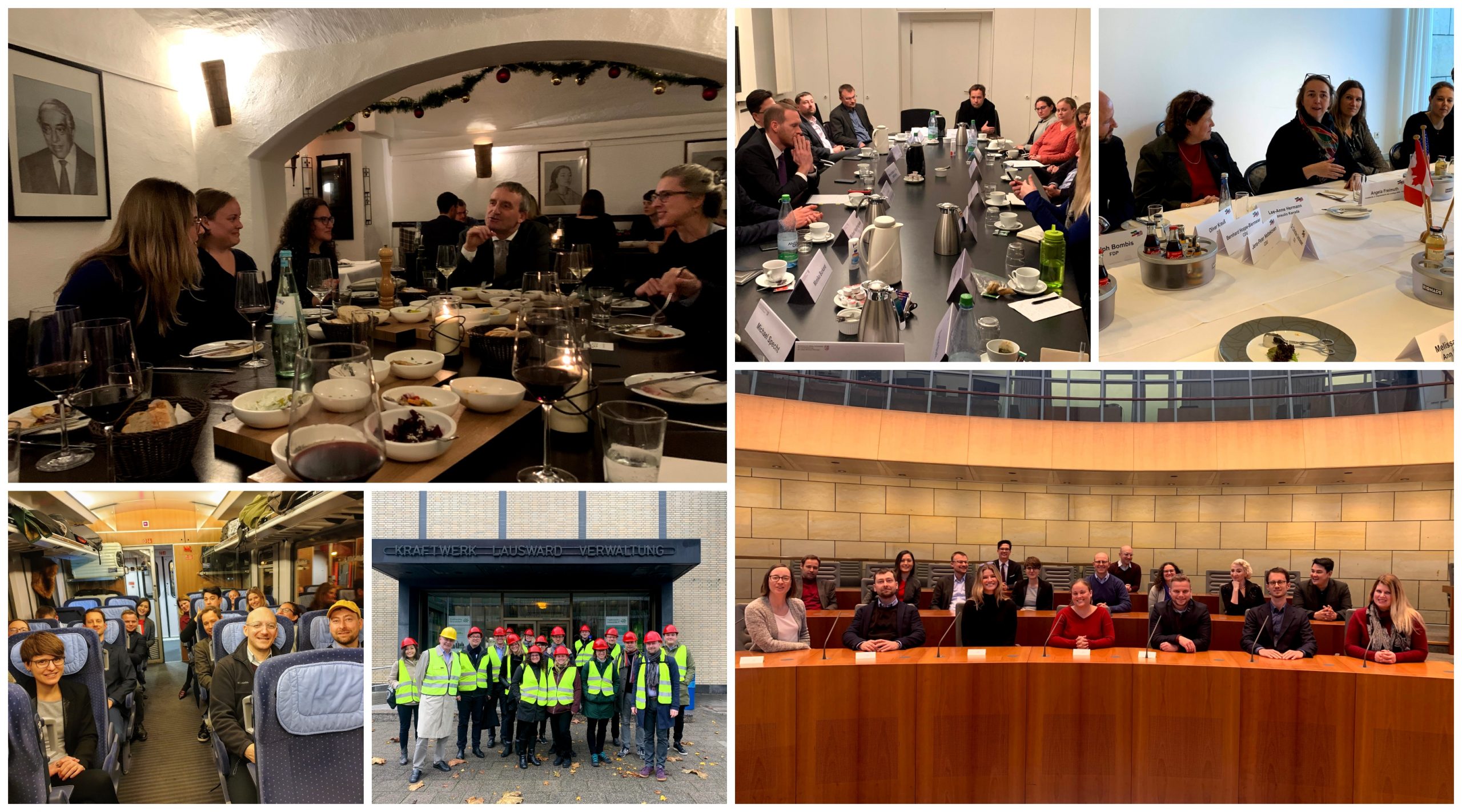 With the rising cost of rent, the local energy company seeks to address how to reduce utility costs. The delegation visited the Stadtwerke Düsseldorf’s Fortuna Power Plant, which reuses the energy from the industrial areas of the city to produce heating for housing.

Before leaving Düsseldorf, the delegation met with individuals working on the state level to address sustainable development. Jan Heinisch, the State Secretary for the Ministry of Regional Identity, Communities and Local Government, Building, and Gender Equality, explained how the state government provides subsidies to local governments to improve infrastructure. The group also met with representatives from the Landtag (State Parliament) of North Rhine-Westphalia all of whom are members of the Free Democratic Party including Angela Freimuth, Vice President of the Landtag; Franziska Müller-Rech; and Ralph Bombis. During a roundtable discussion with the NRW-USA Parliamentary Group and U.S. Consul General Fiona Evans, the conversation focused on issues like social cohesion and workforce development.

On the morning of December 10, the group began its programming in Mannheim with a meeting with Christian Hübel, the Strategic Manager for the City of Mannheim. The city adopted a new strategic plan, which will address the sustainable development goals (SDGs) set by the United Nations. All departments within the city will have to embrace the SDGs in order to plan for the future of the city, much of this work focuses on social inclusion. In 2016, the city adopted the Mannheim Declaration on Living Together in Diversity, in which diversity rather than integration becomes the main focus. More than 300 organizations have since signed the declaration.

The city is actively working to become more attractive for startups and small- and medium-sized businesses. During a visit to the Jungbusch area of Mannheim, the group was able to see recent developments to rebuild and renew the waterfront of the city. This area now provides a young vibrant neighborhood for the more than 300 startups.

Taking a one-day excursion from Mannheim, the group traveled to Heidelberg to explore how a university town is handling similar challenges. At an early morning meeting with Lord Mayor Eckart Würzner, the group learned how Heidelberg has become the first city to build an entire neighborhood that is CO2 neutral. The Bahnstadt area of Heidelberg has revitalized a former rail-yard. Although the project is not yet completed, the Bahnstadt already provides housing for over 4,000 as well as schools, supermarkets, and even a cinema, which are all carbon neutral. 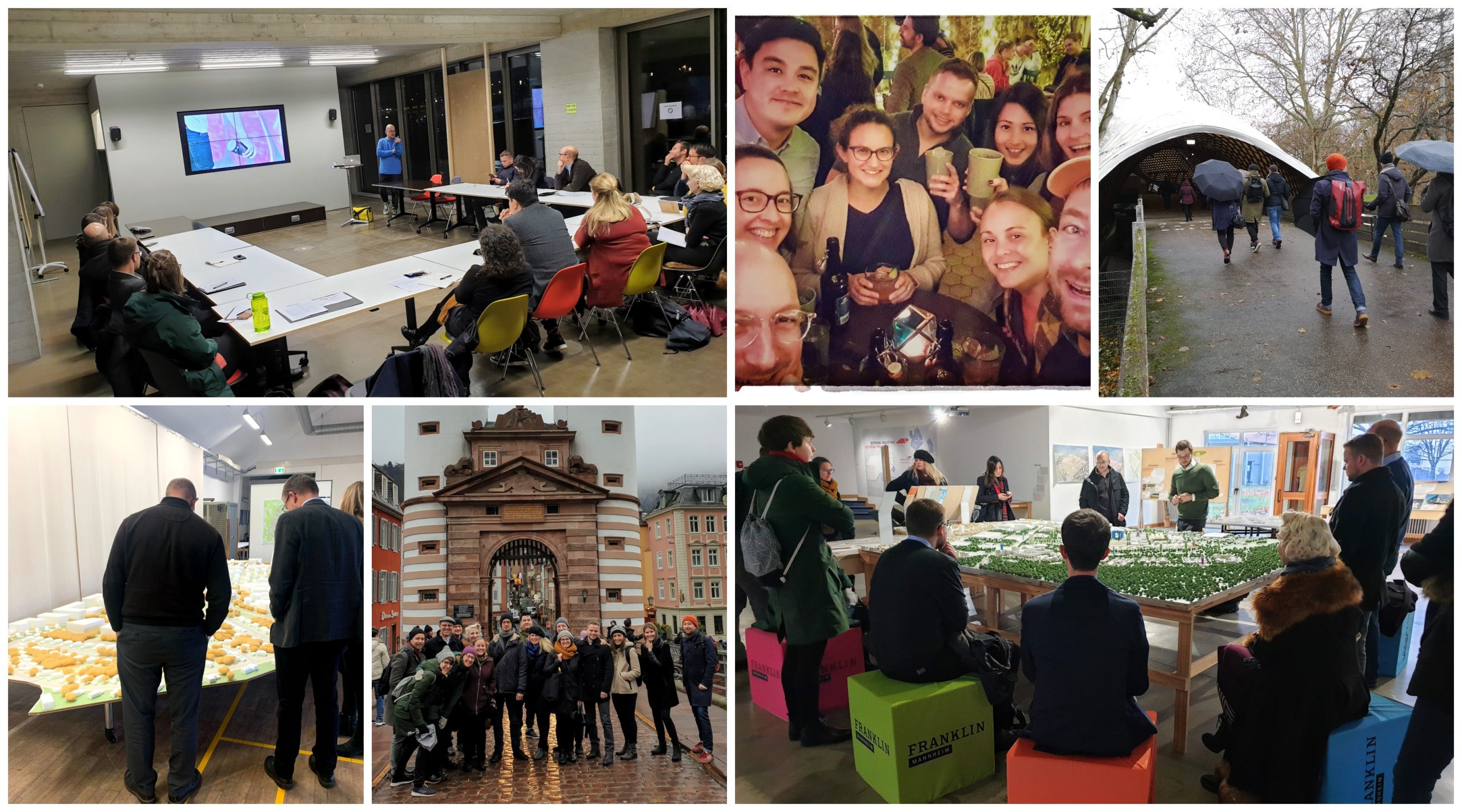 During the final day of the study tour, the group met with city planners in Mannheim, who are working on reintegrating former U.S. Army bases into new communities. More than 10,000 Americans soldiers lived in Mannheim until 2011. The land was bought by the city and is being redeveloped into a smart city. Expected to be fully operational in 2023, the community will be larger than the city center of Mannheim and will provide at least 40 percent low income housing. As part of the redevelopment, the city has included new mobility structures including an electric car-sharing program.

The program in Mannheim ended with Dirk Grunert, the Mayor for Education, Youth, and Health. Although Mannheim has dedicated 25 percent of the city’s budget to education, the city is currently faced with a shortage of teachers as the city is growing. In the coming years, the city will build new schools to provide space for the increased amount of students.

Formally and informally throughout the week, the members of the delegation reflected on how their cities are facing similar challenges. On both sides of the Atlantic, cities are faced with affordable housing, accessibility to transportation, and social cohesion. Although solutions can be hard to transfer one-to-one from one community to another, the group came away with a deeper understanding of how cities can learn from each other. In spring of 2020, the group will meet again in the United States to see how cities are addressing similar challenges on the other side of the Atlantic.

Special thanks to our hosts in each city, Martin-Sebastian Abel (2019 DZ BANK Fellow) in Düsseldorf, Irmintraud Jost in Heidelberg, and Matthias Krebs (2016 McCloy Leadership Mission in Urban Affairs) in Mannheim.