From 2010 to 2015, the American Council on Germany offered Study Tours on Immigration and Migration Policy. Each year, 15 Americans traveled to Berlin for a week-long fact-finding mission to meet with German officials and other thought leaders. The group was given the opportunity to discuss best practices for integration, diversity, and refugee and asylum policies. The Study Tours were designed to create open dialogue between American and German experts. The program was made possible by a European Recovery Program grant from the German Federal Ministry for Economic Affairs and Energy. 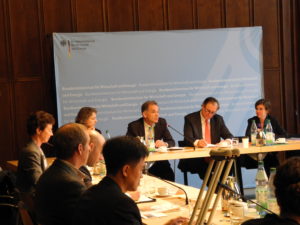 During the five-year program, delegations met with senior-level officials and policymakers, experts and practitioners, and business leaders working in the field of immigration. Speakers included: Ali Aslan (2010 Young Leader), Journalist and TV Host; Naika Foroutan, Professor of Social Sciences at Humboldt University; Jürgen Hardt, Coordinator for Transatlantic Relations at the Federal Foreign Office; Lynn Kickbusch, High Inspector for the German Immigration Police for Kreuzberg and Neukölln; Bundestag Member Omid Nouripour (Alliance 90/The Greens); Cornelia Schu, Director of the Expert Council of German Foundations on Integration and Migration; Thomas Volk, Coordinator for Islam and Dialogue between Religions at the Konrad Adenauer Foundation; and Astrid Ziebarth, Director of the Immigration and Integration Program at the German Marshall Fund of the United States. The group also had meetings at the Federal Chancellery, the Federal Foreign Office, the Federal Ministry of the Interior, and the U.S. Embassy in Berlin.