“Toward a New Transatlantic Narrative: The German-American Partnership in Turbulent Times”

On May 23 and 24, 2016, the American Council on Germany and Atlantik-Brücke e.V. partnered to host a high-level policy conference in Washington, DC, titled “Toward a New Transatlantic Narrative: The German-American Partnership in Turbulent Times.” Nearly 200 American and German opinion leaders and decision-makers from government, business, media, and academia engaged in lively discussions concerning the most pressing issues on the transatlantic agenda.

Peter Wittig, German Ambassador to the United States, helped set the stage for the conference by discussing the importance of the German-American relationship as the cornerstone of the transatlantic partnership. He said that in today’s complex global environment we need to work together to find solutions to myriad challenges – and he touched on many of the topics that conference participants would later address during the panel discussions. 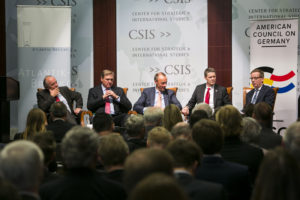 As President Obama’s term was coming to an end, the push to reach an agreement on the Transatlantic Trade and Investment Partnership (TTIP) had taken center stage in transatlantic discussions. Ambassador Michael Punke, Deputy United States Trade Representative and U.S. Ambassador and Permanent Representative to the World Trade Organization in Geneva, discussed the importance of concluding a comprehensive TTIP agreement before the end of the year. He then joined a panel featuring Matthias Machnig, State Secretary in the Federal Ministry for Economic Affairs and Energy; Friedrich Merz, Chairman of Atlantik-Brücke e.V.; and ACG Board member Eric Spiegel, President and CEO of Siemens USA, for a discussion of the economic ties that bind the U.S. and Germany. The panel, which was moderated by Dr. Michael Hüther, Director at the Cologne Institute for Economic Research, focused on the urgency of reaching agreement on TTIP but also moved far beyond this topic. They also discussed the role of the World Trade Organization, Industry 4.0, and the digital economy, as well as workforce development. 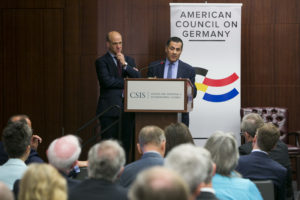 On the second day of the conference, Dr. Vali Nasr, Dean of Johns Hopkins University’s School of Advanced International Studies (SAIS), talked about the changes in the international order and the foreign policy challenges facing the transatlantic alliance. He focused on the need to manage relations with China and Russia, the impact of globalization, and the Middle East. Noting that the Sykes-Picot Agreement marked its 100th anniversary earlier in the month, he said that the post-World War II order and Pax Americana have collapsed. Dr. Nasr expressed concern that Europe and the United States have not been proactive in developing a new security architecture to deal with today’s foreign policy and security challenges. He closed by saying that “the transatlantic partnership is not just about the transatlantic relationship. It is about the bedrock of the global order which is currently under assault.”

Building upon Dr. Nasr’s points, Dr. Markus Kaim, Senior Fellow at the German Institute for International and Security Affairs (SWP), moderated a conversation with Dr. Thomas Bagger, Director of Policy Planning at the Federal Foreign Office, and Dr. Charles A. Kupchan, Senior Director for European Affairs at the National Security Council. Dr. Kupchan began by saying that – from a U.S. perspective – the world is very euro-centric. He echoed the sentiment of previous speakers that the German-American relationship is critical in dealing with today’s global challenges. Dr. Bagger talked about the legitimacy of German and American leadership – but went on to say that one has to be aware of the limits of one’s own capabilities. He added that neither Germany nor the United States have always been able to shape outcomes. Therefore, it is imperative to consider where one can make an impact – and with which tools. 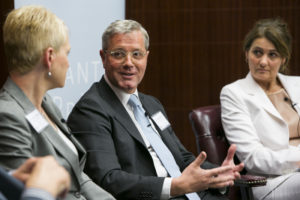 Given the significant attention to relations with Russia, the conference dedicated a panel to this topic. Katja Gloger, Editor-at-Large at Stern magazine, moderated a discussion with Professor Alexey P. Portanskiy of the World Economy Department at the National Research University – Higher School of Economics in Moscow; Dr. Norbert Röttgen, Member of the Bundestag (CDU) and former Federal Minister; and Dr. Celeste A. Wallander, Senior Director for Russia and Eurasia at the National Security Council. They had a lively discussion about German and U.S. policies toward Russia and the role of President Vladimir Putin. The group agreed that continued – and sustained – dialogue with Russia is essential. Dr. Wallander summed up the session nicely by describing four key principles in managing the relationship with Russia: deterrence, resilience and a decrease in vulnerability, cooperation with Russia, and maintaining an “open-door” policy.

Christian Flisek, Member of the Bundestag (SPD) and Spokesperson in the 1st Committee of Inquiry/18th EP (NSA); Dr. Tobias Lindner, Member of the Bundestag (Alliance 90/The Greens), Spokesperson for the Bundestag’s Budget Committee; John P. Schmitz, Managing Partner at Schmitz Global Partners, LLP; and Ian Wallace, Senior Fellow of the International Security Program at the New America Foundation, discussed privacy and security in the digital age. Roland Berger GmbH Partner Dr. Torsten Oltmanns moderated the discussion, which addressed some of the critical differences between Europeans and Americans when considering personal privacy and security. Both countries recognize the challenges in dealing with cyber-attacks, industrial espionage, and the use of technology to plot and conduct terrorist attacks.

In light of Europe’s migration challenge, and the increase in populism on both sides of the Atlantic, the fabric of society in Europe and the United States appears to be under pressure. Ladan Yazdian, Visiting Scholar at the Otto Suhr Institute of Political Science at the Free University in Berlin, led a discussion with Klaus-Dieter Frankenberger, Foreign Editor for the Frankfurter Allgemeine Zeitung, and Tamar Jacoby, President and CEO of ImmigrationWorks USA, on some of the overarching trends in the two continents. They discussed work as a “crucible of integration,” education, workforce preparedness, and growing populism. Both Germany and the United States are facing many similar challenges – including a public dissatisfaction with the political status quo – but for different reasons. 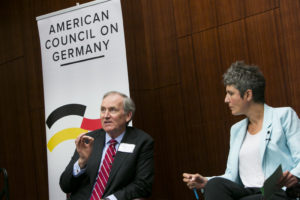 Reflecting on the themes of the day, Ambassador Wolfgang Ischinger (1978 Young Leader), Chairman of the Munich Security Conference, and Ambassador Robert M. Kimmitt, Chairman of the ACG, closed the conference by reflecting on what was – and was not – discussed over the course of the two-day conference with Ines Pohl, Foreign Correspondent for Deutsche Welle. Ambassador Ischinger said that although on the surface it may appear as though relations between Germany and the United States are great, under the surface there are rifts. Ambassador Kimmitt responded that sometimes differences in opinion can lead to a stronger relationship. As they considered the issues on the transatlantic agenda of today – and tomorrow – both speakers identified issues such as growth and innovation; energy, the environment, and sustainability; the digital economy; and the broad notion of security as critical areas of discussion moving forward.