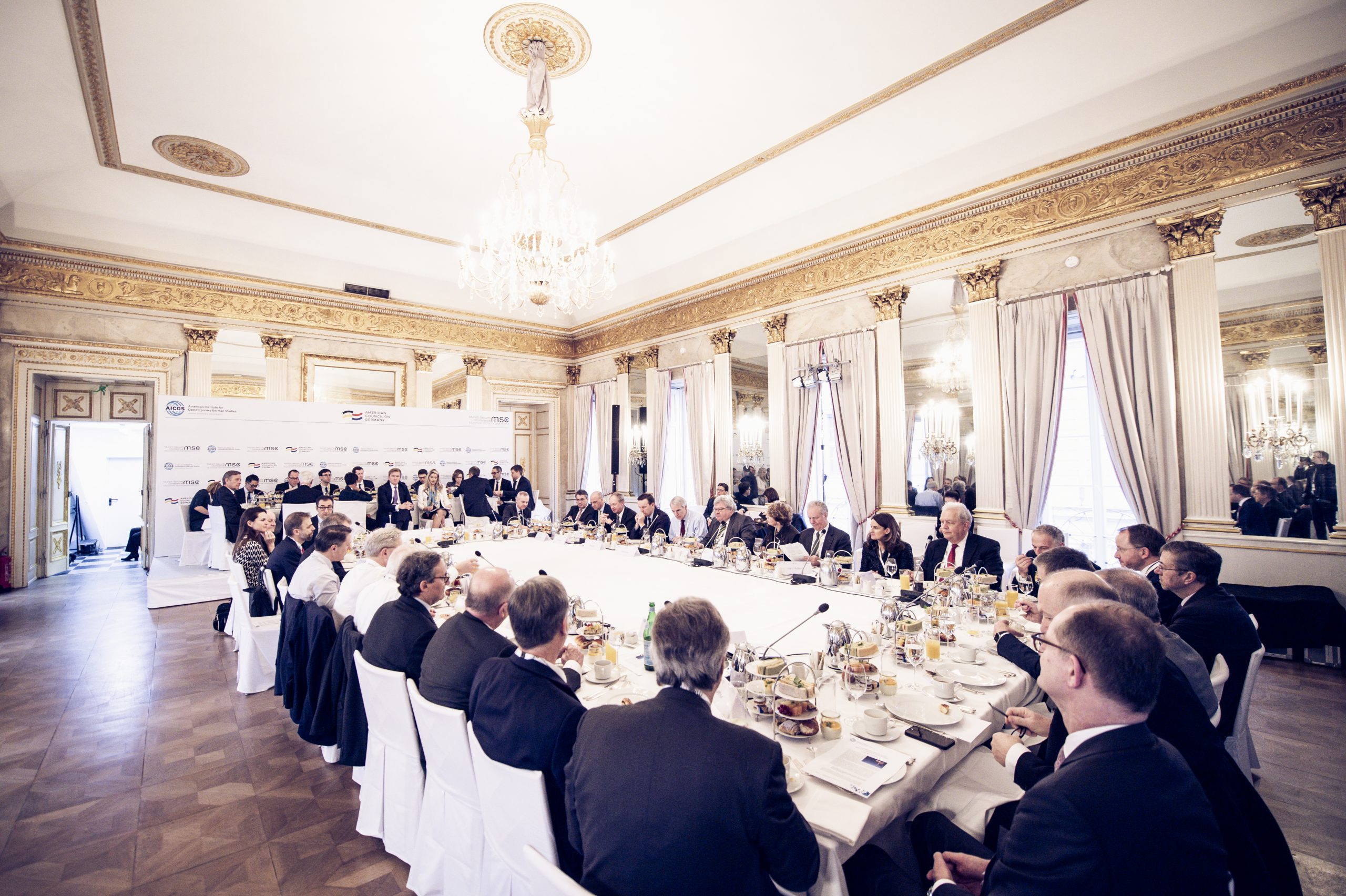 Held under the Chatham House Rule, the discussion focused on three overarching themes: the geopolitical environment, the case of 5G infrastructure, and the prospects for deepening transatlantic cooperation. Overall, the discussion was characterized by a high degree of agreement and a spirit of shared purpose.

There was a common sense among those contributing to the discussion that China is the overarching challenge to the West, raising questions of values, technological leadership, and fundamentally the balance of global power. Several expressed the view that only together could Europe and the U.S. succeed in meeting myriad challenges posed by China. Some also commented on the significant influence of Germany within the European Union – particularly in light of Brexit. The challenges associated with China’s growing influence make it a potential binding force for the transatlantic community. The opinion was expressed that China needs to be dealt with on multiple levels – as a partner, as a competitor, and as a “systemic rival” (as a recent European Commission paper described it). The situation is complex, and the challenges are interconnected – not only within China but also in countries where it plays a major role (through the Belt and Road Initiative, for example) and in international institutions. The assertion was made that, long before the current Western concerns arose, President Xi was talking about the West as a strategic rival to China. But a “new Cold War” with China is not the answer. Among the areas identified as transatlantic priorities were: trade and WTO reform; threats to open democracies; the implications of advanced technologies (not only 5G); and human rights.

China has not been playing by the international trade rules; state subsidies and the role of state-owned enterprises were mentioned as significant issues. The United States and the European Union could work together to address these imbalances. Similarly, the World Trade Organization is in need of reform. It was acknowledged that the U.S. and the EU had a disagreement about the WTO appellate system, but it was noted that the U.S., EU, and Japan had worked together well to develop ideas for WTO reform, which demonstrated the potential for cooperation.

The vulnerabilities of open societies have to be considered in the case of the Chinese government’s engagement with our systems of higher education. Chinese authorities have sought to gain access to scientific knowledge and technical know how through their engagement with Western universities. One example came to light recently at U.S. universities, with faculty members receiving unreported payments from China through the “Thousand Talents” program over the course of many years. An investigation is underway. It was mentioned that the role of the Confucius Institutes requires scrutiny as well. There was no objection to teaching Chinese language and culture, but in some cases the institutions have also been operationalized as a platform for economic espionage. In the United States, the number of Confucius Institutes has decreased from 109 to 85 in recent years.
China’s growing technological proficiency has enabled the use of new technologies to track people and fundamentally change how individuals relate to each other and the state. These capabilities have helped to quell dissent inside the country – a serious human rights issue in China and wherever China seeks to export its domestic security model. The Senate supports initiatives such as the State Department’s Global Engagement Center with its counter-propaganda mission and support for objective journalism. While the current transatlantic debate over standards and access to 5G telecommunications networks is important, it is not the only technological issue: Advanced battery technology, artificial intelligence, and other areas require public investment, and the United States and Europe should strengthen efforts to cooperate.

Turning to 5G, it was noted that the U.S. administration and the Speaker of the House of Representatives (in her public remarks on February 14 at the MSC) took the same position regarding the dangers represented by Chinese suppliers in the building of 5G networks. 5G networks have strategic significance and would form the digital nervous system of our societies, especially for industrial and military uses that might be less noticeable to individual consumers. It would be dangerous to allow companies that are subject to foreign state influence to be part of it, because of the implications for compromising personal data and intellectual property and undermining industrial processes and military capabilities. Clearly, China views its domestic 5G development as a national security issue and will not grant access to its own system. In a worst-case scenario, control of a 5G network could provide China with the ability to shut down an economy built to rely on advanced communications in industrial and commercial processes. A suggestion was made that 5G should not be an anti-China effort but rather a transatlantic project to demonstrate to our publics that governments are able to address the impact of new technologies while assuring a higher degree of security.

It was pointed out that the United States has banned Huawei and ZTE from the U.S. 5G network. There is a bipartisan effort in Congress to pass legislation that would provide financial support to small carriers to “rip and replace” existing Chinese equipment. In the longer term, the future of 5G will include a move from a hardware-based to a software-based approach.

It was felt that the transatlantic partners have been reactive and need to develop a more proactive stance. Participants stressed bipartisan agreement in the U.S. on the strategic challenge posed by China. It would be impossible for the U.S. to address it successfully without cooperating with German and European partners. The view was offered that the challenge the U.S. faces is not imported automobiles, and it is counterproductive for the U.S. government to threaten or implement such tariffs under Section 232 of the Trade Expansion Act. There was also a call for greater coordination between the Committee on Foreign Investment in the United States (CFIUS) with European partners. More generally, in all areas where there are shared transatlantic concerns, there should be concerted transatlantic actions to address them, with intellectual property rights and artificial intelligence policy mentioned as examples.

Preserving the technological edge of Western societies was described as a crucial priority; if we lose our competitiveness and control of our technological backbone, it would be a dire situation. Ensuring the ability to apply technical knowledge in industry is key. As long as the West remains technologically competitive, the impact of trade threats from China will be manageable, because global interdependence means not only that the West needs China, but that China needs the West, too. The economy remains an important area for transatlantic policy coordination, but it is also important to note Chinese efforts to create a Beijing-centric system of global governance and to expand its role in UN bodies and trade institutions like the World Intellectual Property Organization.

The significant role of the EU was highlighted and the point was made that Europe is not a “foe” of the United States. Trade policy, investment screening, the joint EU risk assessment, the joint toolbox of mitigating measures, WTO reform, and policies addressing subsidies and state-owned enterprises are all addressed at the EU level in Brussels.

At the same time, the view was offered that, contrary to widespread opinion, engagement with China has had some successes – such as climate change. The suggestion was made that creating a transatlantic legislative caucus on China could be a valuable step to promote transatlantic cooperation on these issues, helping also to provide a new glue in the relationship.

Participants also discussed the significance of the COVID-19 virus (New Coronavirus); there was a call for greater Chinese transparency with the World Health Organization and strengthened international efforts to develop a vaccine. The measures to contain the outbreak exposed the vulnerability of supply chains: The masks, gloves, medical gowns, and similar supplies for the U.S. medical sector were all principally manufactured in China, along with active pharmaceutical ingredients.