The ACG has hosted discussions with Annalena Baerbock, The Green Party’s candidate for Chancellor in the upcoming German election. She met with members and friends of the ACG in New York in late 2018 and participated in an official side event at the Munich Security Conference in 2019, which was hosted by ACG and AICGS. 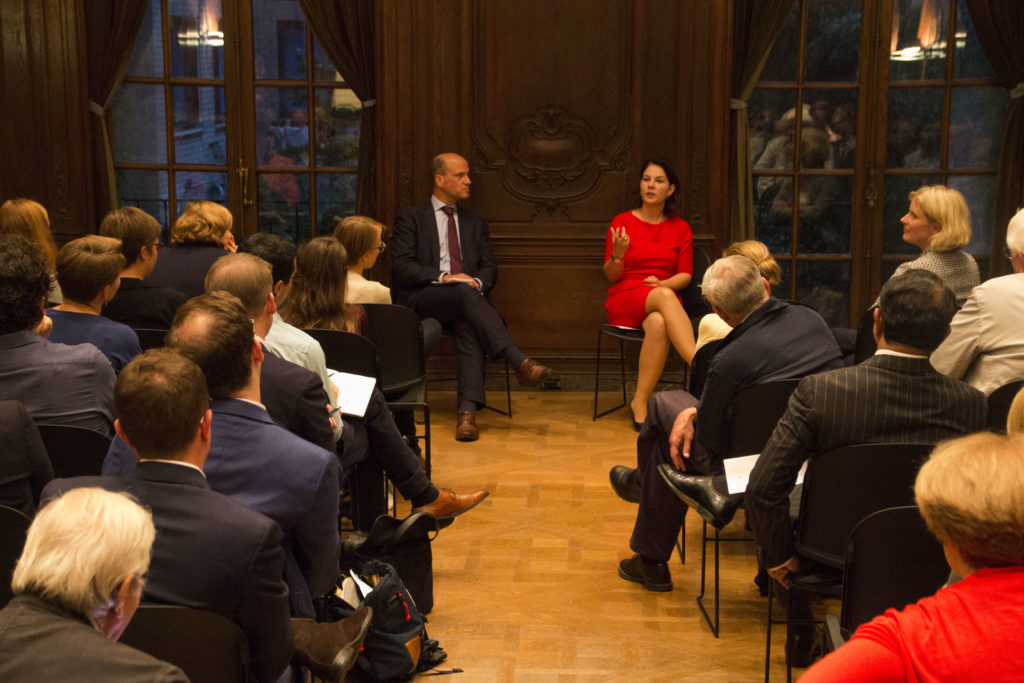 In 2018, she said that standing firm on principles is not enough and that in light of the changing political landscape in Germany the Greens have been making an effort to supplement optimistic narratives with acknowledgments of current problems, and apocalyptic narratives with possible solutions. She added that the Greens seek to convey what is at stake while providing realistic plans of action.

In 2019, she said that the United States and Europe share core values that should make it easy to rely on a strong transatlantic alliance, but in today’s multipolar world, Europe – and Germany – must focus on security from both a military/defense and economic perspective. She added that China poses a specific challenge – in both economic and military terms – and it would make sense to develop a common China strategy.

“Authoritarianism, Populism, and Challenges to Democracy: A German Perspective”

On September 10, 2018 over 60 members and friends of the American Council on Germany gathered for a political salon with Annalena Baerbock. In her capacity as Co-Chair of Alliance 90/The Greens, she has led her party to a surge in the polls, developed strategies to reach out to new voters, and strengthened progressive politics despite rising populism. Her remarks focused on the changing role of the Green Party and what can be done to combat populist trends and authoritarianism.

Ms. Baerbock set the stage by describing Germany’s current political situation. After the parliamentary elections in September 2017, the right-wing Alternative für Deutschland (AfD) became the third-largest party in the Bundestag. Just last month, riots erupted in the eastern German city of Chemnitz as right-wing extremists (including AfD supporters) became violent after the fatal stabbing of a German man by migrants and flashed Nazi salutes. Memories from Ms. Baerbock’s own youth of citizens in Leipzig taking to the streets with candles to call for freedom and democracy in 1989 contrast sharply with the extremists in Chemnitz who chased down immigrants. Ms. Baerbock believes there is a serious threat to democracy.

She stated that this threat requires a response from Germany’s political parties. However, she noted that many of her Bundestag colleagues have mixed feelings about how to address the problem. Some fear that engaging with the AfD will give the populist party more legitimacy, while others, including Ms. Baerbock, support open dialogue and debate with members of the AfD. She recalled an instance where she was debating an AfD candidate who ultimately stormed off the stage. “We need to challenge them enough so that THEY decide to leave,” she explained.

The AfD is the largest opposition party in Germany, and it is connected with other right-wing extremist parties across Europe – which all benefit from support from Russia. “This is a moment when all the democratic parties have to stand together,” Ms. Baerbock said. The Greens have tried to do their part by emphasizing other areas of their platform rather than simply their traditional focal points of climate change and human rights. They see themselves now as defenders of democracy and the rule of law in addition to the issues they have focused on since the 1980s.

Some German voters, too, are doing their part by becoming more engaged in the political process. After the election of Donald Trump, the Green Party saw a spike in membership. This same increase in engagement is necessary for all upcoming elections, particularly the European parliamentary elections in May 2019. Ms. Baerbock said that a priority for the Greens in the upcoming state and European elections will be to increase voter turnout (the last European elections had only a 25% turnout in Brandenburg, she explained) rather than bring back voters from the AfD, which is not feasible.

Ms. Baerbock hopes to increase voter turnout by standing firm on her principles stating that “politics is all about principles,” which she views as a black and white issue. “You either support European integration or you don’t,” she said. In response to a question, she stated, “I am on the side of democracy.”

Standing firm on principles isn’t enough. Ms. Baerbock said that the Greens have been making an effort to supplement optimistic narratives with acknowledgements of current problems, and apocalyptic narratives with possible solutions. The Greens seek to convey what is at stake while providing realistic plans of action.

Ms. Baerbock also repeatedly emphasized the importance of politicians visiting small towns and speaking with voters. This is especially important for the Greens because they are regarded as an intellectual party. Through her own experiences meeting with Germans in more rural areas, she has found that a lot of the big areas of concern are being misunderstood by other politicians. For example, opposition to migration does not stem from giving to refugees; it’s about making sure that Germans get enough for themselves. The Greens want to restore Germans’ faith and confidence in the state by strengthening social security. This will prevent many Germans from feeling left behind. When Europe fails, it pushes people toward nationalism. When the state fails to provide, it pushes people toward populism.

Ms. Baerbock briefly touched on the Green Party’s perspective on the future of the transatlantic relationship. She argued that Europe needs to invest more in defense and security to prepare for the times when the transatlantic relationship can’t be taken for granted. She said that Germany has to do more to protect its interests. She also acknowledged that the United States and Germany are dealing with similar challenges to democracy right now. When asked about the importance of the U.S.-German relationship, she responded by saying “Part of my answer is that I am here today.”