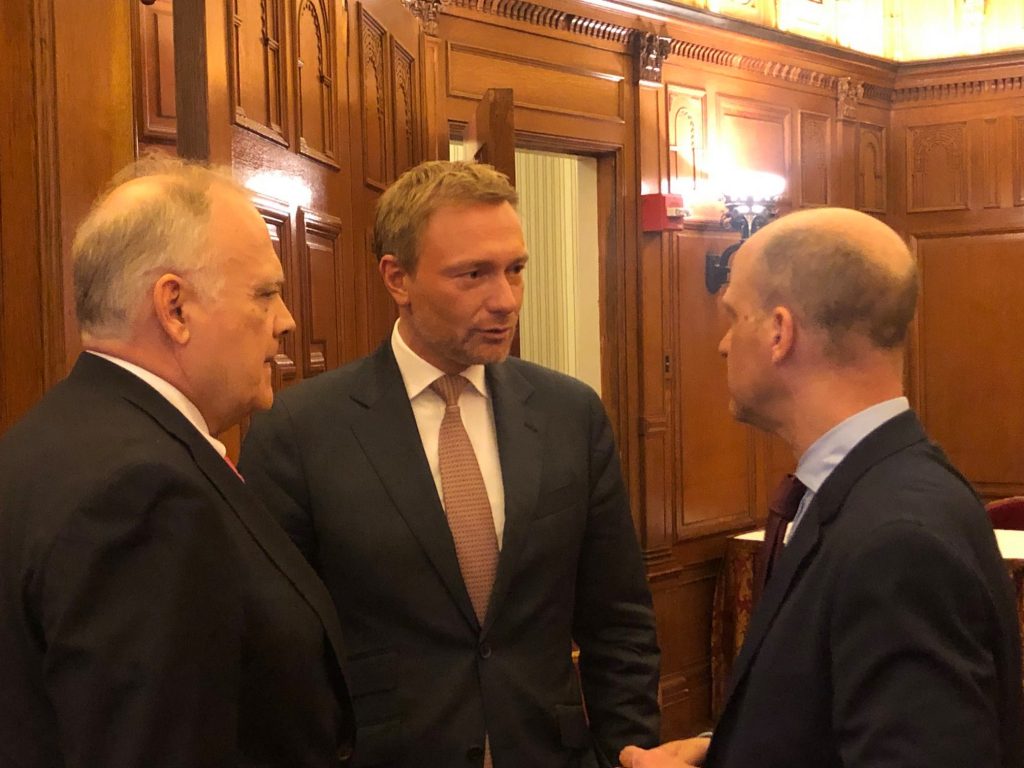 On May 2, 2019, the ACG hosted a roundtable discussion with the head of the Free Democratic Party, Christian Lindner. At the time he talked about the 2017 election results and coalition negotiations – but also about the future of his party and about the challenges in Germany, Europe, and on the world stage. Many of those challenges still exist today.

“Visions, Divisions, and Decisions: Germany, Europe, and the Parliamentary Elections”

On May 2, 2019, some 25 members and friends of the ACG gathered for a roundtable discussion with Christian Lindner, Chairman of the Free Democratic Party (FDP). Just a few days after being reelected as party Chairman, he shared his insights regarding his party’s return to the Bundestag, coalition negotiations in 2017, and Chancellor Merkel’s future, as well relations with Russia, China, and the United States.

After the 2013 election in which the FDP failed to pass the 5 percent threshold in order to remain in the Bundestag, Mr. Lindner helped rebuild and rebrand his party. The FDP had been considered to be the pro-business party, but for Mr. Lindner this was not the true cornerstone of the Free Democrats. In taking a more liberal pro-market stand, the FDP received 10.7% of the votes, bringing them back into the Bundestag in the fall of 2017. Now, nearly two years later, Mr. Lindner is working to bring the FDP back onto the international stage.

Mr. Lindner noted that he is often asked the same question: Why did he end coalition negotiations with the CDU/CSU and the Greens? For Mr. Lindner, it was important to withdraw from the coalition talks because he felt joining a Jamaica coalition would not have been true to the values of the Free Democrats. He realizes that had he gone along with the talks, he would now be Minister of Finance and Vice Chancellor, to which he said, “I want to be this.” However, he believes that joining such a coalition would have come at the risk of destroying his party. He believes the FDP is in a better position today than it has been in decades. The party is now more independent and able to define what it stands for and against.

Mr. Lindner does not believe Chancellor Merkel will step down soon, due to the upcoming European parliamentary elections. Chancellor Merkel needs to be part of the process of stabilizing the EU after the elections. Also, if Merkel steps down before the state elections in Germany this fall, it could be an advantage for the far-right party Alternative für Deutschland (AfD). But, he did say that there could be a change in leadership in the spring of 2020 – and certainly in late 2021 at the latest.

With the European elections taking place in just a few weeks on May 26, Mr. Lindner sees this as an opportunity for Free Democrats across Europe to build a new coalition in the European Parliament. His party has already began talks with sister-parties in Spain and France. He believes this will help create a stronger European Union by allowing them to focus on important issues like trade, migration, and energy policy. He added that the EU should focus less on issues which could be governed by individual countries – especially because there are national differences.

Trade is important to the FDP, and Mr. Lindner believes that Germany as a whole needs to rethink its business model and begin to focus more on the Mittelstand, or small to medium size businesses. While the automotive industry is important, the Mittelstand remains at the core of the German economy. Mr. Lindner also believes the EU and the United States need to create a common strategy vis-à-vis China. He realizes this may be difficult in the current political climate, however he believes that German politicians need more facetime with members of Congress to help strengthen the relationship.

He realizes there are still many areas of contention between the United States and Germany. One major issue is the current debate over spending 2 percent of GDP on defense. Mr. Lindner noted he is not a supporter of the mandatory 2 percent defense spending. He believes it is more important to determine clear objectives of what is needed than to simply spend money on defense. He believes there isn’t a need to purchase tanks and artillery, but rather invest more in cybersecurity. If that ends up being 1.8 percent or even 2.2 percent, it doesn’t matter if the objective is clear.

In closing, Mr. Lindner said that he believes that the transatlantic relationship remains critical, however, he thinks that Germany does not have a strong enough presence in the United States. He sees great opportunities to rebuild and renew the bilateral relationship by working at the local level, through cultural programs and with schools.