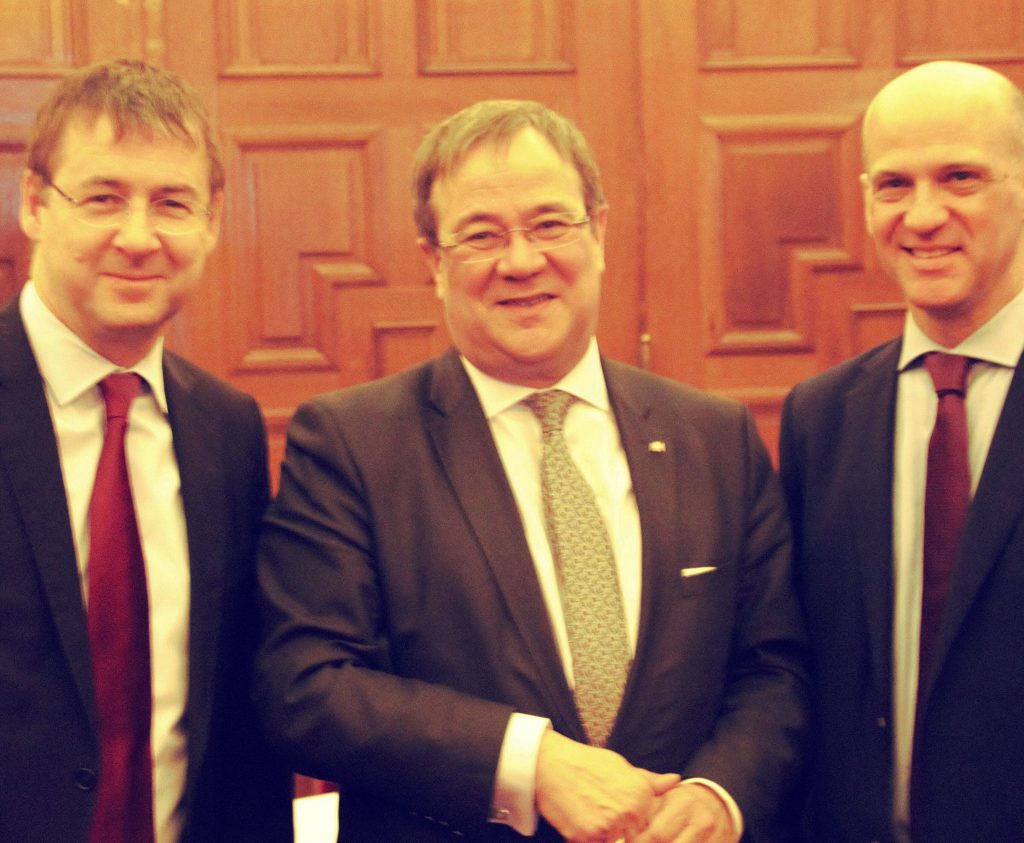 After jockeying for power for weeks, it looks as though the union of Christian Democrats from the CDU and CSU will rally behind CDU party leader and Minister-President of North Rhine-Westphalia Armin Laschet as their “Kanzlerkandidat.” Rival Markus Söder, the Minister-President of Bavaria, conceded in the race to succeed Angela Merkel as the center-right candidate for chancellor.

The ACG hosted Armin Laschet for a Breakfast Briefing in March 2019. At the time, he focused on the role state and local governments can play in meeting common global challenges, such as climate change and migration. If anything, the role of cities, regions, and states in addressing international issues has grown since then. He also talked about the future of Europe and the need for Europe to assume greater responsibility in foreign and defense policy.

“National Politics, Regional Issues, and the Future of Europe: A View from North Rhine-Westphalia”

On March 1, 2019, the American Council on Germany held a Breakfast Briefing with Armin Laschet, the Minister-President of North Rhine-Westphalia. In the space of two and a half days, Minister-President Laschet had dozens of meetings in New Jersey and New York. As noted in the introduction by ACG President Dr. Steven E. Sokol, Mr. Laschet’s visit to the United States comes at a critical time for the transatlantic relationship. Despite tensions between Washington and Berlin, Mr. Laschet’s meetings focused on the value of state and local partnerships and – at the United Nations – on the continued importance of multinational cooperation to meet common challenges such as climate change, migration, and the increasing economic and political influence of China.

Mr. Laschet began by highlighting how much has changed in German-American relations since the two countries stood so close together during the Cold War. He stressed that those who support the relationship must work much harder to explain its importance, especially because social media allows for more direct communication from leaders with the public that no longer goes through the traditional government and media filters like in the past. Mr. Laschet also voiced a need for supporters of German-American relations in all the political parties in both countries, not just in the CDU or in the Democratic party.

The State of North Rhine-Westphalia, Germany’s largest with a population of 80 million, is the industrial heart of the country and continues to go through significant structural change, specifically as black coal, brown coal, and nuclear power get phased out. Mr. Laschet explained the importance of German companies based in the state, like Evonik, making international investments in the United States, because this expansion ends up driving further success for the company and employees back in Germany. Creating barriers through tariffs only end up hurting workers in both countries.

Touching on Franco-German relations, Mr. Laschet said that closer cooperation between France and Germany is important for the stability of the European Union and for leadership in the world. As an example of closer cooperation, he cited the German and French “co-presidency” of the UN Security Council in March and April. Both countries have agreed to jointly set the agenda during each country’s presidency. He also noted the shared view of both countries vis-à-vis the transatlantic partnership with the U.S., saying that when the Élysée Treaty was signed in 1963, President Charles de Gaulle was angered by the preamble added by the Germans in support of NATO and the relationship with the U.S. In the recent Aachen Treaty, both countries were in complete agreement about the need for a close transatlantic partnership.

Turning to Brexit, Mr. Laschet expressed concern about the economic consequences of a no-deal Brexit for Germany and Europe. Additionally, he suggested that Brexit, regardless of what eventually gets decided in the coming months, could have a significant impact on the European parliamentary election and the make-up of a new EU Commission. In the past, Social Democrats together with Christian Democrats held a majority that elected the Commission. Given Brexit and the rise of populist parties in many EU member states, these parties could together form a majority to determine the composition of the next Commission.

In response to a question about the new German Industrial Policy 2030 released by Federal Minister Peter Altmaier, Mr. Laschet indicated that Germany has always had an industrial policy supporting companies and the question always is how much government aid should be provided and to which types of companies. Citing the recent EU decision to prevent the Siemens-Alstom merger, he discussed the challenge posed by the new EU Competition Law. While it may be beneficial to prevent monopolies within the EU to support SMEs, the question is whether the law prevents the formation of companies needed to be competitive with those in China. An additional challenge for Germany and the EU is finding the appropriate balance between allowing foreign firms entry into the EU market and guaranteeing security.

On the need for Germany to take on more responsibility in foreign affairs, Mr. Laschet discussed Germany’s difficulty in Syria given that it is not clear what the desired goals of involvement would be – defeating ISIS, removing Assad, supporting the Kurds against Turkey, or containing Iranian influence. He also provided an overview of the progress and challenges posed by Germany’s efforts to meet Paris climate treaty obligations. While stopping domestic coal mining, Germany is still importing coal from South Africa and Colombia. The decision to phase out nuclear power plants, which was probably a mistake to do first, means Germany must use natural gas for an interim period until wind/solar energy provides greater energy. This results in more imported LNG (mostly obtained through fracking) from the U.S., which is opposed by environmental groups, and Russian gas, which has led to disagreements about Nord Stream 2 with the EU and the U.S. On this issue, Mr. Laschet supported Chancellor Merkel’s position, saying it does not matter which pipe is used to deliver the gas, and a so-called dependency on Russia is not likely as issues never arose throughout the Cold War.